Up early with the sun, packed, ate crackers and PB for breaky and we were off to the ferry. Had an auto rickshaw pre-booked to take us from the hotel to the ferry – why is it they always show up 15 minutes early?

Enjoyed the ferry ride chatting with a doctor from western India who was on holidays with his family. He gave us a pretty good idea of where to go and what to see in India.

Arrived in Port Blair, found our hotel and headed out for a walking tour of the town.  Port Blair is the biggest city in the Andamans. We found the Cellular Jail near the water.  It was built by the British to imprison Indians that were fighting for independence.  The prison housed about 690 political prisoners. The treatment of prisoners was brutal, which included whippings, there were many many deaths during the time the prison was operational. In 1947 India gained its independence from Britain and the prisoners were released. 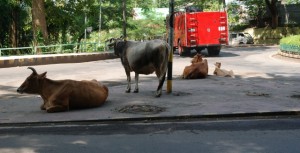 During our walk in Port Blair we spotted a number of unique species.  There were Median Cows, Sidewalk Cows, Patio Goats, Garbage Cows, Park Goats and Parking Lot Cows. 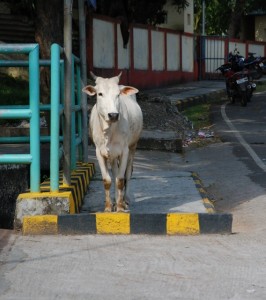 Today is the day that the long journey home begins. We start at the farthest point we traveled to and work our way back home. We have been on Havelock Island for a week and although there is always more to explore, I think we both feel it is OK to leave. Having a short tour of Port Blair is good because we are not likely to return to these islands.

We always return home with mixed feelings.  We have established a travelling rhythm and it would be easy just to keep on going, but there is so much we enjoy at home and it will be good to return and get involved with the things from which we have taken a pause.

This entry was posted in Bhutan and India and tagged Andaman Islands, cellular jail, India, port blair. Bookmark the permalink.