“Whale!” shouts D from the bow of the dive boat. “Which brownies are you eating?” calls Shaggy from the aft. Everyone laughs. We all rush forward and watch a humpback whale spout and then show us his tail. Magnificent creature!

As we motor into the harbour, a turtle surfaces for a breath or two of air. A large mottled brown beast that everyone loves.

Pulling into the dock, David calls “Eagleray!” and we all look to the port side then to the starboard side to watch a spotted eagle ray glide under the boat looking for tasty treats left by fishermen.

Cruising to our dive sites we often see a pod of spinner dolphins frolicking in the water. Oohs and ash are emitted when a dolphin treats us to a jump and spin out of the water.

We hear there is a tiger shark in the area and one day coming into the harbour we see a black shadow swimming below us, which the crew indicates is the shark, himself. Looks like a moving black rock to me, but hey, a tiger shark it is!

Going scuba diving is not just what we see underwater but also what we see from our perch on the boat above the water. 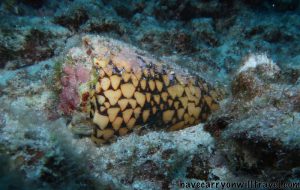 This entry was posted in Hawaiian Islands and tagged Hawaii, Kona. Bookmark the permalink.