After leaving Drumheller bathed in sunlight with nothing but blue sky we turned west and observed the darkness aloft. We drove without hesitation and proceeded to drive into an out and out rain storm. We have a goal and not much will get in our way.

Last night the campground in Black Diamond we were going to stay in was closed due to flooding. We ended up in a campground in Turner Valley called Hells’ Half Acre” and yes, it was. So, this morning, instead of staying for another night in hell, we packed up in the pouring rain and vacated with a sigh of relief. A fine start to another day watching the Tour of Alberta.

We have breakfast at the Black Diamond Bakery and Coffee Shop. The aromas wafting around the counters were heavenly! And the sights in the counter windows were divine. We sufficed with our usual of eggs, sausage, toast for Murray and hash browns and bacon for me. We chat with some locals who are not so thrilled with the Tour of Alberta coming through town. When asked if they were going to watch the tour, they shook their collective heads “No”.

Since we packed up in the rain and in a hurry, we did not organize for the day, so we find an overhang on a commercial building, back in and organize for the day. I’m am sure we looked rather odd changing our clothes, brushing our teeth, making lunch and re packing the vehicle, but it worked and we stayed dry. 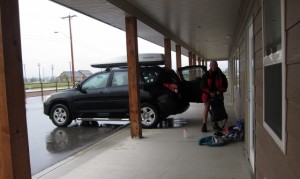 Next stop, a coffee shop called “The Stop”, the only place in Black Diamond with available wi-fi. We drink tea, hot chocolate and post our blog. The place is packed and we end up sharing a table with Clara, who is THE “Tour Tracker” for the Tour of Alberta. She listens to the race radio and composes and posts, from the live feed, for all the big races in North America on Tour Tracker.

Time to head to the start of Stage 4. I hang out at the Garmin-Sharp bus hoping to get a glimpse of Vandeveld, Zabriskie, Dennis, Millar and Hesjedal. Murray wanders around the other team vehicles. 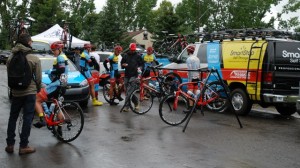 Stage 4 Before the Start

The start of the race is a sprint out of the blocks. No neutral zone ride this morning, just swoosh – out they go.

Today we drive back roads to the hill where the KOM points will be given. The traffic is heavier today, it is a weekend and we are very near to Calgary. 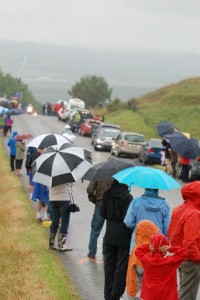 The tour makes a very hilly loop enabling us to  watch the climb twice and it is still exciting to see the riders cruise by so close and make the hills look so easy. The break is 10 mins up and the chase is only hard enough to keep Rohan Dennis in yellow and he has a 17 minute advantage. 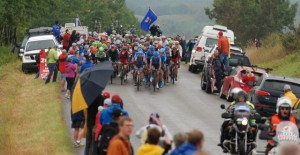 As I write this we are sitting in the Econo Lodge on MacLeod Trail, in Calgary. This is how far we had to go to find a hotel with rooms. Between the tour and Spruce Meadows horse jumping competition a hotel room is hard to find.

Tomorrow will find us at the start in Okotoks and then to downtown Calgary, with G&M (Debbie’s Calgary cousins), to watch the finishing circuit.