We are sitting in the McDonalds in Drumheller posting to our blog and drinking OJ and Coke and eating hash browns. As we work, we hear a conversation between 2 seniors behind us about the Tour of Alberta coming through Drumheller. Then we hear 6 other seniors start discussing the tour also. We are impressed to know that the Tour of Alberta is affecting so many people in the communities and causing so much conversation. I go over to the group of 6 and ask them if they are going to watch the race today. We sit and chat for a good while, they ask me all sorts of questions about riding and the tour. It was great fun and I hope I enlightened them. 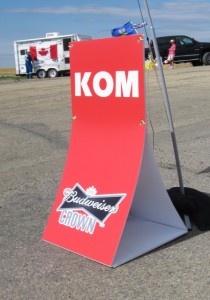 There is a pretty long (3.5 km) steep (6%) climb going out of Drumheller and it is a KOM points spot. Today we decide to ride our bikes up the hill and watch the riders race to the KOM line.  We don our kits, hop on our bikes and off we go. No warmup – sounds like the West Coast Trail! The hill starts gradually and I start eating away at my gears, careful to leave a couple for the end as I know it kicks up slightly. Murray gains ground on me right away, I am pedaling squares at the start. Once I get my rhythm, the squares turn to circles and I chug away. It is a long climb, made harder by the wind bellowing in my face, by the top I am in my lowest of the low gears. Murray is waiting for me at the top anxious for my arrival since I have lunch with me.

We chat with the few people at the top, eat our lunch, take a few pictures and slowly watch more and more people arrive. By the time the riders are near, there is quite a crowd gathered along the road.

We hear there is a break of about 18 riders and that Rohan Dennis (in 2nd place in the GC, I think) is in the break. Peter Sagan is in the peleton, which is far behind. The break starts up the hill and the cheering begins. All of a sudden a couple of riders sprint for the top to garner the KOM points. Robert Gesink, one of a climbers by reputation and the first of the sprinters to the KOM line ends up with the Mountain Jersey at the end of the day. 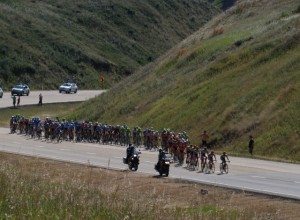 Five minutes later the peleton streams up the hill. They ride very close to the shoulder and I have to move back to not block their way. They make climbing look so easy, but I know they are hurting.

Now for our bit of fun! DOWN DOWN DOWN the hill we race, in a crouch going as fast as we dare on our bikes. We get to the vehicle, change, stow our bikes and hustle over to the finish line.

We hear the break has split and is now even further in front of the peleton. This has been a day of wind and advantage for the break. 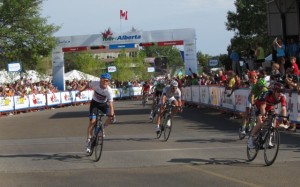 Rohan Dennis crosses first, wins the stage and is now the leader of the tour’s general classification. When the peleton rides in, the time difference is about 14 minutes. 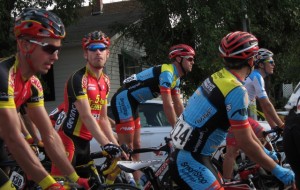 End of the race

This has been another exciting day for a couple of Tour of Alberta tag alongs. I hope the seniors we met in McDonalds had as good of a day I as did.