While at the Paradise Taveuni, we managed a couple of open water swims. See, we signed up for Kelowna’s Swim Across the Lake in July, so we are trying to get in as many longish swims as we can. Murray figures we swam about a kilometre. I swam and looked at the fish as I went, so it was fun.

When guests depart from the Paradise, about 15 employees gather to sing a farewell song. A fellow plays guitar and there are male and female singers. Many of the singers were not known to me, perhaps kitchen staff. Some of the servers gave me big hugs after to say good bye. They are not professional singers and they were very good singing harmony and the deeper voiced guys were singing echo to the higher pitched ladies. It was very effective.

We met many new diver friends at the Paradise. It is a more close knit atmosphere than the Volivoli, I think. Perhaps the Volivoli had too many big dive groups staying there while we were there and that makes it harder to strike up conversation. At the Paradise they set dinner up at ‘the long table’ three times in a week and it more or less forces conversation. The morning after such a dinner you greet the people you sat with as friends.

We met divers from Virginia, close to DC, Belgium, near Sydney, Adelaide and New Zealand. Spent time dining and chatting. All very enjoyable and who knows, we may meet up with them again somewhere.

Today was a hot one. Debbie reads on the internet it was 30C but with the humidity it ‘feels like 40C’. It felt like 40C.

We asked at the hotel desk how to grab a local bus to get downtown. It is about 4 km and with the temp where it is we don’t really want to walk. Armed with the information passed on we are waiting at the bus stop and I strike up a conversation with a young lady also waiting for the bus. She tells us we can flag a mini bus and they will take us the to the city center for a few cents more. We are talking $1 Figian vs 70 cents. In the end we get into a cab with the lady and we each pay $1 and get a taxi ride. The taxis are constantly pulling over and asking if we need a ride somewhere and I just shoo them away but when at a bus stop to return to the hotel one of the fellas that I had shooed away earlier stops to see if he can give us a ride. I told him we got a ride for $1 each on the way into town. He wanted $5 I turned my back and walked back towards the bus stop. He caved and we got a ride for $2. He turned on his meter to show me the ride was actually a $5.70 ride but begrudgingly accepted the $2 we had agreed on at the start of the ride. 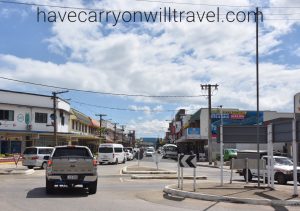 The main street of Nadi, Fiji

The main street is the only street the tourists walk on. It has a variety of shops that sell everything from spare car tire to sexy lingerie. In front of every tourist shop there is a tout asking you to stop in at their shop and see what we absolutely need to take home. They are friendly enough and not really pushy but they are touts none the less and a bit annoying. As soon as we walk up one of the side streets and along the next block that parallels the main street the tourist shops disappear and the touts along with them. I still find it amazing that visitors to a country only travel where all the other visitors travel. They refrain from taking a short step off that trail and experiencing a bit of the real country. Debbie and I then wandered into the ‘hood’ for a ways just to get a better perspective. 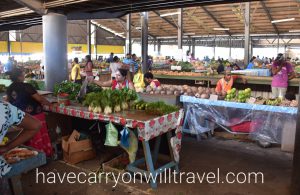 The next place we wander through is the market. A really nice market at that. Clean, well organized, and stocked with all the vegetables and fruit you can imagine. There is no meat section which is common in most open air markets we have visited. The fresh meat section is usually quite ‘gross’ and smelly so I did not miss it. The largest section of the market was dedicated to kava. A mildly intoxicating drink everyone in Fiji partakes in. It is in fact a custom to welcome all visitors with a kava ceremony. There is a ceremony for the preparation of the drink, it is then placed in a communal coconut shell cup and it is passed from person to person. I tried the drink when I was in Fiji 30 years ago. It was god bloody awful. I have managed to duck out of two different offers to sit and try it again and I will try my damnedest to continue ducking. But, by the number of stalls selling kava root it is a main stay in Fiji and the tradition is not going to end any time soon. 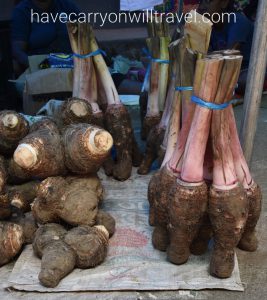 The bus station and mini bus station are hives of activity. As with most places in the world with similar stature as Fiji the buses gather at one central spot. The people come from shopping or whatever engages them in the city, find the bus headed home and board it. These places are busy. Unless it is a express bus it will stop anywhere along the route until it reaches its final destination. The buses are quite full when they leave the central station. There are always buses coming and going so you have to keep your head up as you cross the road and you have to keep you spidey sense tingling as there as a lot of seedy types hanging about.

There were very long lines at the Vodaphone stores today. Every Fijian received a letter in the mail offering a $50 refill on their bus cards. Sort of like a tax refund but instead they are upping the ante to use public transportation, maybe getting a few folks to leave their car at home. Although the traffic is not very bad here.

Catching an early flight tomorrow so not likely to see too much more of this land but it is an interesting place, far more interesting than the confines of the resorts and probably deserves a little more time spent.

This entry was posted in Fiji and tagged Fiji, Nadi, Paradise, Taveuni. Bookmark the permalink.