We have been sequestered in our house for about 4 months. Renovations had taken over our lives and we hadn’t really thought about anything else. Since this is a TRAVEL blog we could not figure out how to twist house renos into travel so we have been remiss in keeping up with the entries. Sorry.

Yesterday we flew the coop. We have been planning on a camping trip for about 2months and we are there. We travel all around the world and yet anywhere east of Alberta, in Canada, is uncharted territory for us. So east we go. We only have a few days so the distance cannot be great but east we go. 150 km or so into Saskatchewan.

The best laid plans of mice and men we thought we would leave Tuesday around noon. At noon it starts to rain, an auspicious start to a camping journey. We race the rain east (wind was from the west).  As we neared the Alberta/Saskatchewan border we had driven clear of the downpour. Even had a bit of sun. By the time we reach The Battlefords, our destination, we were well clear of the front.

It is funny what a border will do. The Alberta/Saskatchewan border is in the middle of Lloydminster. As soon as we are on the Sask. side we noticed a difference in infrastructure. The motels were not quite as fancy, the roads need a bit of repair, and the general appearance is a bit more rundown. Alberta is a “have” province and it shows.

The landscape does not change that much. It is said that Sask. is very flat. To someone from somewhere other  than the prairies this may seem the case but to us it is very rolly with lots of green in and around the fields. Quite stunning actually.

Sask. is one of the places in the world that does not change to daylight time. It remains on Central Daylight Time all year long. It was a matter of much discussion as to what time it was once we crossed the border. In the end we assumed correctly that the time was the same as Mountain Daylight Time.

There are a couple of campgrounds in and around the Battleford area, we had time so we decided to have a look. The Eiling Kramer Campground  in Battleford was our first stop. Nice place, not crowded. The other one we thought we should see is 36 km north of town. With loads of time to spare we thought we could check it out and return to Battleford if it was the better choice.

We crossed the North Saskatchewan River. I had the crazy thought that the water that was passing under us was the same water that we had seen the day before when we crossed the bridge to the north side in Edmonton yesterday.

We turned northeast headed out of town. Looking up we realized the storm was hot on our tail. It took us about a minute to realize if we continued driving in the direction we came from we would be headed towards a downpour and setting up camp would not be pleasant. A decision had  been made, a U-turn on the highway and back to the Eiling Kramer Campground in Battleford it is.

On crossing back over the N. Sask. River I am sure I noticed a log that I had seen yesterday on our second trip over the river in Edmonton! Proof that the water passing under us is the same water we had seen at home.

At the camp ground of the 50 or so sites that were available to camp in we carefully chose a spot and set our tent. Just as we were finished, the rain started. This is when we opted to eat in town rather than get wet trying to make supper in the open. Oh to be old and flush with cash. Dined at The Li King Restaurant. I find that the Chinese restaurants in small towns are always reliable and usually predictable so they are a good bet. This place was exceptional. Funny I thought that here we are in small city Sask and the food prices are the same as big city Alberta. Then the food came. We had ordered enough food for four. Lunch tomorrow is Chinese food I guess. EXCELLENT food though. I would recommend a stop at the Li King if you are on your way through Battleford. 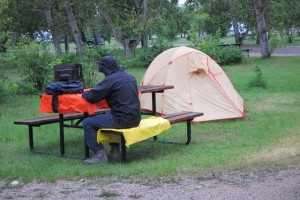 Back at camp the rain had subsided so we sat at the picnic table and planned the next day or two. It was the first time we had seen an actual Saskatchewan map. Just get setup and the drizzle started. Then it dawned on me. Just as we had seen the same water in the N. Sask. River pass below us we were about to live through the exact same storm we had just left. Not the exact water as it had already fallen and was seeping into the ground somewhere in Alberta but none the less the same storm. Isn’t life strange?

Rain on our tent

The rest of the evening was spent in the tent doing crossword puzzles. We turn in early. It poured all night. Slept 10 hours! The tent did what is supposed to and we are dry.