The hotel is quite full. A tour group from Germany showed up last night. We were going down to eat breakfast and the dining area was full, so we wandered down the street. We ate at Glenary’s. OK place, the food was good. I still cannot believe how cheap food is in India. Debbie and I eat what we want and we spend $15/day for the both of us. Today we were discussing the fact that ½ of a Tandoori chicken was $.50 more at one place than another. It doesn’t take long to get into the swing of Rupees rather than dollars.

The people here are very nice. When you are walking on the street they are much the same as at home. Some will say ‘Hi’, most won’t. They will all acknowledge our hellos. It is when you stop to chat or if you engage a shop owner in conversation that you notice that they are all willing to discuss the state of the union, or tell me for the twentieth time how to say ‘thank you’ in Hindi.

It’s the day to visit the tea plantation. Happy Valley Tea Plantation to be exact. We find out later it is owned by Harrods of Kingsbridge, a throwback to the colonial era I presume. The trip is easy, all downhill, no matter where you go from the town centre it is downhill. A small side trip resulted from me indulging in too much water at breakfast and a stop at the worst can I personally have ever had the chance to pee in.

We found the road down to the plantation and headed down.  Part way down a couple of fellows started talking to us, asking where we were from. A worker (who was sharpening his vicious looking short scythe) told us the path to the building was closed due to the landslide and we shouldn’t bother to go down.  We decided to go part way down anyway as there were a number of groups of tea pickers working and we wanted to get pics.

We noticed a path/road heading back to town and decided to keep walking down and connect with that path.  One of the fellows we chatted with earlier showed us a way to cut through the tea growth to avoid the slide area. Very helpful he was.

This part of our walk was what Mur was waiting for.  We definitely walked through residential Indian Darjeeling. It wasn’t the slums, it was middle class or so. Met more kids whose pics were taken.  Said hello to more folks sitting outside their homes or going about their daily routine and passed ladies wearing, crisp, clean and bright saris, walking the mud path home from their errands. Ladies doing laundry and laundry laying out to dry.

The most disturbing sight was the garbage in the water ways.  We saw a number of streams flowing down the slopes just filled with garbage. It is sad that this happens and that there is no understanding of the hazard of this practise. Again it is the ideas passed on from ‘first world nations’ to a people with no history of packaging and not helping them deal with the ever increasing amount of garbage. I don’t understand the fascination that the east has with western ideology and it only seems to cause them grief from what I can make out. 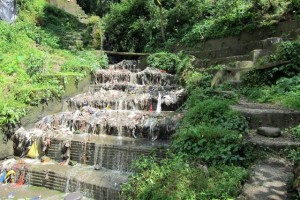 Although we did not know exactly where we were and were traveling on instinct we entered the ‘downtown’ area exactly where we wanted to. Still not at the top, we walked up on a couple of paths yet unknown to us and when we emerged we were 50 m from the hotel.

The next couple of hours were spent ass to a park bench in the Chowrasta, the central square, watching the world progress.

Lunch was at Hasty Tasty, an Indian vegetarian version of a fast food place that makes everything from scratch as it is ordered. It advertised a minimum of 30 minutes for the order to be made. Momo, pakora, and a cheese dosa all very tasty, just as the name implies. The hasty part needs a little work, but I would rather they changed the name and kept the system the same. The folks that worked there really hustled and looked like they liked the work.

Debbie was pooped, but I decided to go for another long jaunt.  I headed for the Lama Gumpa, not the official name, which was 3 km out and back in a direction we had not ventured yet. It was an OK walk to a disappointing destination but I did see another quadrant of India we had not ventured into.

I’m getting used to walking along the edge of the road with the cars buzzing so close you can feel the breeze. Most of the drivers here are somewhat cautious, there is the occasional nut but they are few. That makes it easier to trust them. I still have to remember not to get too complacent as there is only so much room on the road and it is only polite to share.

All in all, I would say to others visiting Darjeeling to allot 4 whole days. With that amount of time, most of the town could be covered at a leisurely rate. More time would be needed to visit the hinterland and do some hiking. I like the place, it is an easy entry into India, different enough to sharpen the senses but not so intense that the culture shock is overwhelming. I have the feeling that it is rather laid back by Indian standards and it makes for a great place to visit.