Here are some final thoughts on the clothing that Murray and I took to San Salvador.

We each took a warm layer (fleece) for the airplane rides and I took a pair of socks. We both wore the fleeces and I wore the socks on the flights down to Nassau. Once in San Salvador, these three items were put in a suitcase and stored in the closet, unused on the island. On the flights home, Murray did not wear his fleece. I wore mine but managed to not put on my socks. 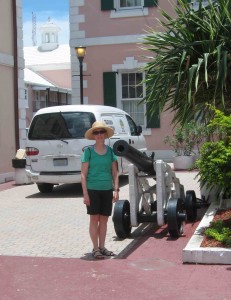 We each wore a light weight wool T shirt on the flight down. I thought I would wear it during the day on San Salvador, but did not. So, once I washed these two shirts, they were not used again until we traveled home. We both had two other shirts in our suitcases to wear. If we really needed to go minimalist, I think we each could have left one T shirt at home.

I went with one pair of shorts and one skirt. They both got used alot for evening wear, not just for traveling, while on San Salvador. My usual daytime wear was my sarong, tied into various “fashionable ensembles”. 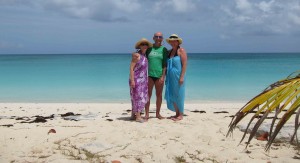 Debbie, Murray and B in our usual day time attire

Murray went with two pair of shorts. He tells me that the shorts he wore on the airplane did not get used on San Salvador and only got worn home again. The big question is “Could he actually travel with only one pair of shorts?” I would say no. What if he ruins his one pair of shorts? Then what?

Overall, we packed our clothing almost perfectly and feel we did not take more than what we actually needed.

This entry was posted in Planning and Packing and tagged carry on luggage, Clothing, San Salvador. Bookmark the permalink.