BC up; BC down

Every time I get on my bike, I’m going up or down. On the prairies we ride all over hell’s 1/2 acre looking for some kind of incline, sometimes for fun, sometimes for fitness. Here I look for a flat spot to spin an even cadence for awhile.

On Vancouver Island I got on my bike near Mill Bay, rode north to Cobble Hill, then went inland and around Shawnigan Lake. Leaving the edge of the lake, I turned south wanting to join up with Hiway 1 so I can get to Victoria. I’m sure there are back roads but I am not at all familiar with the area and did not run into any locals on my ride, so the hiway it is. The very long climb to the top of the Malahat was gruesome. At times I was grinding my smallest gear barely maintaining 12kms/hr. But, if you make it to the top and you are going to end your ride at sea level you have got to have it figured that the ride down is going to be a fast one, and it was. There is one spot on the hiway that the speed limit is 70 kms/hr, I had to use my brakes to slow down enough so I would not pass the vehicles on the right. This went on for 4 or 5 km. ADRENALIN RUSH! The downhill aspect was all the way to the spot I was to meet Debbie. I averaged about 50kph If you ride bikes you know how much fun that kind of ride is.

Yesterday I rode as few kms along the Crowsnest Hiway, Hiway 3, it parallels the Canada/US border. The ride was pretty good. The roads are very rideable with reasonable shoulders on most of them. When I lived in BC in the late 70’s and early 80’s there was 4 inches (100 mm) of white line and an equal amount of pavement to the right. I think that is where I learned to ride a straight line. After all I am still here. So the bike riding has improved immensely. Anyway, the ride was up and down, funny eh. Again I hit a stretch that I chugged up at about 15km/hr. Then after a short flat respite, I enjoyed a 10km downhill jet ride. 50+ from top to bottom. You gotta love it.

Today, Tues. Aug. 23, Debbie and I did a great, out of the traffic, ride. A few days ago my brother told me of a ride from Cranbrook to Kimberly. The old railway bed has be redone, rails removed and surface paved, to function as a multi-use trail. We rode it on a Tuesday so it was not crowded at all. It is 25km up at no more than 3% grade and 25km ripping down. Again, it is BC and even though the grades are not great it is UP and DOWN. We left at about 10:30 so we arrived in Kimberley in time for lunch. A really good ride. You do not have to be a particularly talented rider to do this ride but you do need to be able to sit in the saddle for 50km as there is not much possibility of bailing and grabbing a cab. 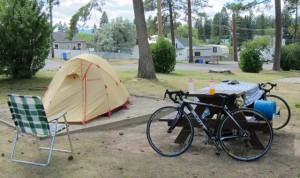 So if you do ride and you are coming to BC, do with your bike like you do with your AMEX card, ‘Don’t leave home without it.’

This entry was posted in Western Canada and tagged BC bike rides, camping. Bookmark the permalink.