In the 11th century there were over 13,000 temples in the immediate Bagan area. Today, it is much less as many have succumbed to age and decay. Our day of touring these astonishing structures has us visiting only eight of them.

We start our day climbing the steep steps of Shiwegugyi Temple to marvel at the 360 degree view. We climb to the top, stroll around the perimeter and then climb down, stopping at each tier to see the changing view. 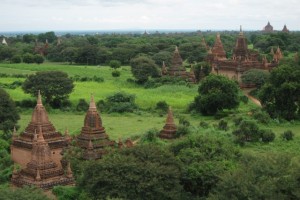 View from on high

Murray and I agree that the view of the temples improves as we descend lower. We snap photo after photo attempting to replicate digitally what we see with our eyes. We notice that Myanmar, and especially Bagan, is very photogenic. So many wonderful views and sights from so many different angles. 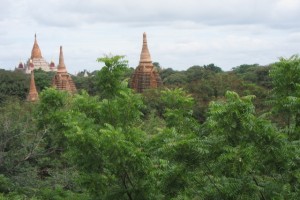 The next couple of temples (phaya, in Myanmar) have frescos painted on the inside walls that date back to the 11th and 13th centuries. There has been some work done to restore the frescos and sometimes it is hard to tell what is original and what is newer. 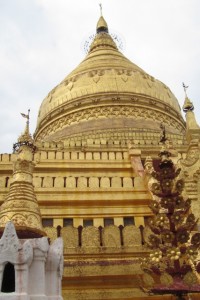 We visit the “golden dome” of Shezgion Temple. L and I agree that if all the white tourists were taken off the site, there would still be many tourists visiting this temple. Burmese people go “on pilgrimage” and travel to the important temples. It is amazing how many Burmese are traveling around Myanmar visiting these sites. We are asked a couple of times by Burmese if they may take our pictures. We oblige happily and in exchange we take photos of them.

By now the temples are starting to blend together. As I write this I cannot conjure up the visual of the next temple I want to write about. That just means we may have seen too many today. So, instead, a story.

The king was very sick. His youngest, and fourth wife, cared for him with much dedication and he eventually got better. The king was so impressed with this wife’s dedication that asked her what she would like. She replied, “I do not want anything for myself, but I worry about my young son. If you would do me a favour and make him your heir so that he becomes king when you pass, I would be at ease.” (Sounds just like a mother, eh?) He said he would see what he could do. He called his five sons together and asked them if they would all agree to a test to see who should be king, and that whatever this test showed, they would abide by. They all agreed. They sat in a circle and the king dropped a white umbrella in the centre of the circle and whoever the umbrella pointed at would be king. Well, the umbrella pointed at the son of the fourth wife, so he became king! When he was king, he built a gorgeous temple and named it HTILOMINLO. HTI means umbrella, LO means a favour and MIN means king. 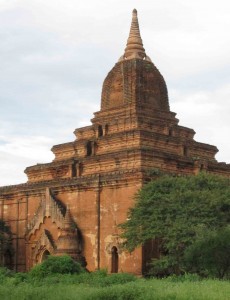 L and I go shopping after. We get intrigued by the tauts selling laquerware and ask our guide to take us to a workshop. We learn about how they make laquerware, the whole process taking about 6 months for small pieces and then we go shopping. It is very informative as I have no idea what went into this artform. 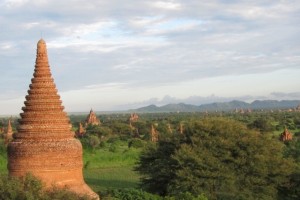 We had decided to watch the sunset from a lesser used temple and head there via a horse cart ride through Old Bagan. Our horse cart driver tells me that he is thankful to us as this is his first fare for today (and it is already 4:00). His English is quite good and we chat away while bumping along. We relax on the heights of the temple and watch the sun slowly sink, sometimes peeking out from the clouds.

It is a day of temples in Bagan and a good day it is.

This entry was posted in Myanmar and tagged Burma, Myanmar. Bookmark the permalink.