Where to go next?

I sat down to lunch the other day and didn’t have anything to read, so I hauled out our atlas and perused it while I ate. I was looking for and dreaming about places that might be interesting and fun.

I started in Europe.  We have been talking about doing a bike trip somewhere in Europe. The north of Spain looks interesting.  Ride from coast to coast – Barcelona to Fisterra.  Ride part of the Camino de Santiago. Visit Balboa’s museum. 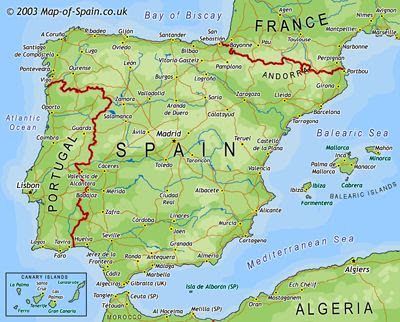 What about Germany. Mur heard about a bike trip along the river Danube from its source (near Donaueschingen) to Budapest. The riding would be on bike paths and small roads. That sounds interesting too! Route of the Danube River from "http://en.wikipedia.org/wiki/Danube_river"

We have always wanted to go to Mali, because of its music. I checked out where Timbuktu was as there is a music festival there called Festival in the Desert.  It is a January event, so it would be a 2013 trip.

I also checked out the Pacific for scuba diving. There are so many islands to venture to.  We could just throw a dart at a map and go where it lands! I will keep on dreaming and maybe we will find ourselves in a far off corner of the world in 2012.

This entry was posted in Travels. Bookmark the permalink.