Once upon a time, a long time ago in a back room of the parliament buildings in Canberra, Australia, the marketing group for the Department of Tourism sat lementing the fact that tourism has become big buisness around the world and yet no one wanted to visit Australia. For many years they had tried to sell a big rock in the middle of nowhere calling it Ayres Rock. It had sparked a little interest but not what they felt was their market share of world wide tourism. The brain storming session went on for days. Someone off handly mentioned ‘too bad all we have is deadly snakes and spiders, Australia would be easy to sell if we had a cuddly little bear or something like that’. Everyone in the room got excited and the ideas flowed like water from the tap. An artist was called in and the Koala began to take shape. It took several renditions but the image they had been looking for was eventually produced. Adorable, fluffy, cute, cuddly.

The next step was to come up with a name. A contest was held. It was a closed contest as only the marketing crew knew anything about this. The prize was the first stuffed animal off the line. As you can guess Koala was the winner. The secretary won the stuffed animal and it sat in a place of honor in her livingroom until she passed on. It is now in a vault accessible only by a select few from the Department of Tourism. Even though the animal was not truly a bear the department head insisted bear be added to the name thus the Koala Bear is known around the world.

The ruse was only partially complete. There was much to do. First every zoo in Australia had to be outfitted with a couple of Koalas for display. The idea was to place them in y’s of the branches of gum trees with the explanation that they spend most of the time sleeping and only move very little at night when no one is allowed in the zoo. These stuffed animals would have small motors that allowed things like twitching ears and other minor movements. Over the years, as robotics progressed, this part of the marketing campaign has been very successful. There are now zoos where one can pet or even hold a Koala and they are very life like.

The next step was to indoctrinate every school kid in Australia, who by the way know Koalas don’t really exist, to point out Koalas in the wild to any tourist they run into. Of course the untrained eye would never be able to pick out a small ball of fluff sitting 30M above the ground in a gum tree so who is going to question it.

I discovered all this while walking on a forest trail at Binna Burra in the Lamington National Park about an hour west of Gold Coast. A beautiful park it is, with much forest that is viewed from very high up an Australian mountain. 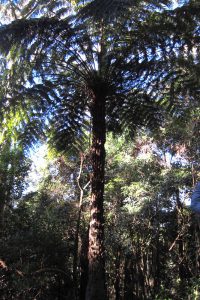 The trail is groomed and easy to follow. In the literature its difficulty rating was 4 out of 5. I did not find it hard walking at all with a hard surface and actual stairs to traverse the changes in elevation. The scenery is great, well worth the time to get out of the city and commune with nature. 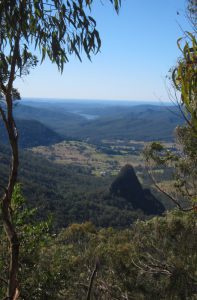 Which brings me back to Koalas. There are plenty of signs on the way to the national park indicating drivers should watch for Koalas as they may be crossing the road and no one wants a teddy bear as a hood ornament. So, upon arrivel at the national park one would expect it would be an excellent place to spot one of these visually elusive animals. The trail is not sidewalk smooth so I keep my head down when I am walking but every 100M or so I stop and look up into the gum trees to see if I can find a Koala. Not one. We walk 7 km which means I stopped about 70 times and looked up into the trees around and there are no Koalas. After that much searching and a little contemplation it was fairly easy to figure out all of us tourists have been hoodwinked. Personally I am OK with it, so far this trip has been quite enjoyable and even the pie in the sky idea of a Koala is a cuddly thought.