The Hippo and the Crocodile

A Folk Story from Botswana…. 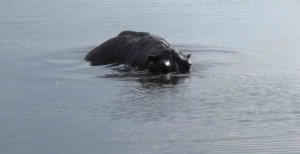 The hippo wanted to come live in a pool, but there was a crocodile there already. The hippo asked the croc if he could come live in the pool and the croc said, “But you will eat all my fish.” The hippo replied that he wouldn’t because he only eats grass. They discussed this for a time and finally the croc suggested that the hippo go ask the creator.

The hippo agreed to help the creator search for the culprit eating the fish and that is why the hippo can be seen in the pool with only eyes, ears and nose above the water. He is watching for the fish thief.

This entry was posted in Tanzania and Botswana and tagged africa, Botswana, Hippopotamus, Hippos. Bookmark the permalink.