Random Thoughts about a Road Trip

Australians and ditch camping. Oh ya there are caravan parks (campgrounds) and some of them occupy some prime real estate. Right on the ocean’s edge with a beach below but it seems it is acceptable to camp just about anywhere. We mentioned the camping around the tourist info buildings or at least on the adjacents streets. OK as long as it is no longer than 48 hours. There is also the true ditch campers. A small pull off on the side of the highway or onto a flat piece of unfenced land and it makes a dandy place to hunker down for time. Quite free form for us anal retentive North Americans.

Road surfaces – Most of the highways we travel are what I think Aussies call ‘sealed’. I would call it chipped. Asphalt with rock chips embedded in it to make for a hard, more durable surface. Boy is it noisy. We had to raise our voices just to be heard. The concrete stretches were less noisy but still loud and then there is the unsealed or asphalt sections that are absolutely noiseless.

The allotment of space for vehicles is much less then in NA. It is bad enough we have to learn to drive on the wrong side of the road, the Aussies allow us less space to learn. The lane widths are smaller, probably not much but it is noticeable and we have to really concentrate with the passenger giving verbal coaching when we drift too far to the edge of the lane. Parking stalls are significantly narrower. We don’t have room to be crocked so if we are not centered we back out and try again.

The speed limits are higher for the quality of road. We are ripping along at 100km/hr on a road that would be labeled 80 in Alberta and a new sign appears allowing us to do 110. No change to the road just the speed limit. They also have many changes to the limits. The allowable speed changes for many things, built up areas, schools, constuction whatever and they always put the ‘slow too’ sign on a downhill forcing the driver to use the brake instead of just taking one’s foot off the gas.

The traffic safety people have a fixation with driver fatique. There are so many signs saying, take a break. Numerous strategies are employed. There are signs with triva questions, mostly Queensland trivia that we did not have a chance in hell of knowing the answers too but we did learn the highest mountain is Queensland is Bartel Frere. There are ‘driver revivier’ stations, rest areas with free coffee when the booth is open. Every few kilometers there is another rest stop, not fancy but a pull over area to grab a snooze. The signs employ little rhymes or sayings to catch one’s attention. One particular piece of good advice is ‘Don’t sleep and drive’. 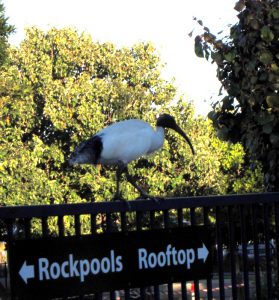 The signage is quite poor. At every corner there may be a street sign telling you what street you are on, and what street you are crossing or there may not be a sign. Who decides where and when they are installed is a mystery. The direction signs showing what way out of a traffic circle (and there are many) you need to go are placed 3M from the circle forcing the decision to be instanteous and only maybe correct. Other highway type signage may or may not be there making driving a bit of a game for those that do not know the way.

The people are truly friendly. People on the street, cashiers in the corner store, the desk clerks at the hotel or the fellow renting cars are all friendly and have the gift of gab. Everyone wants to know where we are from, what we are doing here and how long we intend to be here.

The skyline near Southport

Our trip today is back to Southport. South on M1 into Brisbane and through the city to avoid the toll road. As I said above the signage is a little sparse and we did get lost a couple of times which can be stressful when the map you have is as much outline as it accurate guide but we eventually found our way and arrived exactly where we are suppose to be, at D & M’s condo. No ditch camping for us tonight. 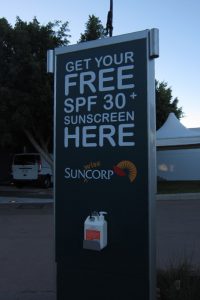 2 Responses to Random Thoughts about a Road Trip