On The Road Into Tonder

Today we stand in the main square in Tonder. 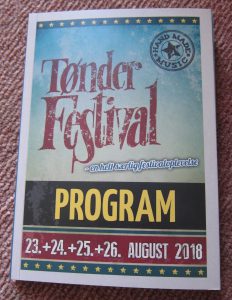 This is coming home with us!

Rise early, on the road at 8.09am and ride into Tonder before 1pm. No gravel today but most of the ride was on highway with no bike road and a shoulder that varied between 8″ and 1′. There are some jerks on the road, one van actually zoomed us but most of the folks gave us a wide berth when it was possible. Much like riding in Alberta these days. We did run into some folks from Germany that were not completely happy with Danish drivers saying German drivers are much more respectful of bicyclists.

Noticeable differences between today’s ride and the last few days. First the lack of a bike road. Until today we have spent very little time on the highway but today it is most of the ride.  The first 1/2 of the ride from Sonderborg has a much hillier profile then else where we have ridden to date. Mind you the last portion of the ride into Tonder is dead pan flat. The farm houses are not so tightly spaced. I’m guessing there are bigger farms in this area. And my favorite difference is the wind had abated. Most of the ride the only wind was the one we created ourselves. When mother nature blew it was not nearly as strong as the winds we have had every inch of the way till now. Debbie even road at the front for quite a while. 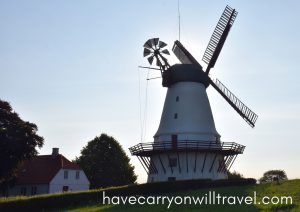 As we left Sonderborg today we climbed a very reasonable grade of a hill. Makes sense as Sonderborg is at sea level and we are headed inland. On the very top of the climb is a very different windmill. One that 30 years ago would have been the only kind you might see but now is in the complete minority. It is now part of history. Probably was 30 years ago but with the literal 1000’s of the more modern electricity producing windmills this ancient predecessor is something for tourists to behold.

On the west side of the highway as we approach Tinglev is the biggest solar panel field we have seen live and in person. Acres and acres of solar panels installed on what was farmland. The decision was made that electricity is more important than food. After all we have enough food. And electricity is worth far more money than wheat or hay. I don’t think the people that made that decision were there when another group said ‘lets go full tilt on coal, I mean what harm can it cause’. They weren’t there when the next group said ‘let’s go full tilt on oil it is harmless and the way of the future’. I have no better solution and I should be dead by the time that particular land will be required to feed the people but I am quite sure the day will come. In the mean time I do need to charge my computer and camera. 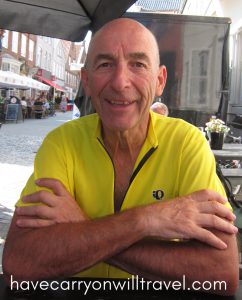 We are in Tonder!

Tonder is packed. The festival starts tomorrow and everyone is congregating. Before we arrived we wondered how such a small center could accommodate the numbers of people said to attend the event. 20,000 descend on a town of 7,900.  Maybe the surrounding towns fill up and folks drive in for the day or take the train or bus.

We go to get the wrist bands we will wear for the weekend and as we wander around the edge of the site we run across the camping area. There are hundreds of small travel trailers and a few tents parked within inches of each other. If half the folks are camping and each camp unit has two people that means there are 5000 units in the field. Hope it doesn’t rain or it will be hell to strike camp when the time comes. 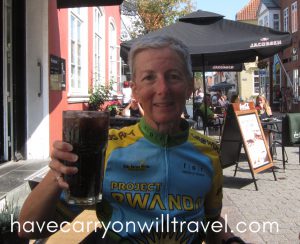 We made it to Tonder! I need food!

As we walk down main street and observe the people we assume are here to listen to music we note there is one overwhelming prominent characteristic. They are all old. I think today was the first day of school for Danish children. It is the first time we have seen bikes at the school yard and school crosswalk patrollers standing at the corner with the stop signs in the ready position. So I am guessing this is not a family event. I also do not think having a solely senior customer base is as much of a problem in Europe as it is in North America. The population is much larger and there is always a large number of people entering the ranks of the aged to replace the ones that depart out the opposite end. Anyway we will see what the weekend brings when all the working stiffs have a couple of days off.

We made it and now the reason d‘etre is nye.