We woke to find L, daughter of J & C, was taken to the local hospital at about 4am with a pain in her side. The heli goes with or without them and they don’t make the flight time. Can’t do much about it.

Yesterday was a bad day for flying and a couple of groups did not make it into the lodges they were headed for. So today the heliport is busy. Somehow we end up on the ‘big bird’, the 212. This helicopter has a passenger capacity of 14. They took four seats out to carry gear. So with only 8 of us going in and 9 headed out they were able to do the exchange in one trip. There is a thin layer of fog over the river but once we lift above it was a clear and blue day. As it is only one flight it was about 30 minutes and more direct, right over the mountains rather than following the valleys. Over the mountain tops we go. Never been on the bigger heli and never been on such a long ride. It was definitely a trip for the record books. 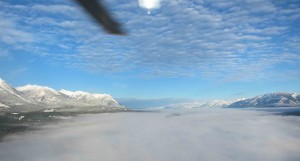 After settling in at Mistaya Lodge we head out on the first tour. First we have a practice session with our beacons. 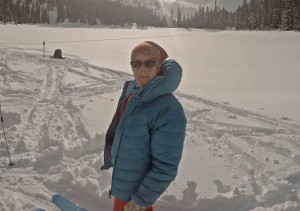 Waiting my turn to find a buried beacon

The up track exists to Heather Ridge and if we choose the right way down it is a mostly wide open and gentle slope. Perfect to get Debbie down on her inaugural journey into the backcountry. In control and patient turns all the way to the bottom. Only one crash and she is up and back on the skis in no time. 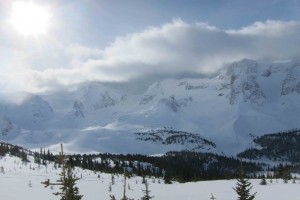 The new snow is a bit dense but very skiable and, in fact, fantastic. Looks like it is going to be a good week of skiing.

The helicopter we rode was new to all of us and Debbie had a first good run, the day is a success. Tomorrow we’ll head in a different direction, no trees at all and hopefully snow as good as today.

This entry was posted in Western Canada and tagged backcountry skiing, mistaya. Bookmark the permalink.