The Gold Coast is the part of the country everyone comes to for a beach vacation. Surfer’s Paradise has long been the summer mecca for Australians and foreigners. I was here in 1986 and although it was not as developed as it is now, it was still busy. The thing that hasn’t changed too much is the beach. I remember this 50M wide beach that literally went on for miles, so far in each direction you could not see the end and it was definitely too far to walk. Today our adventure consists of taking the tram to Surfer’s and walking the 5kms back to the apartment.

It is a beautiful day for a walk. The sky is clear, the sun is not too intense and there is a bit of a breeze to keep things cool. This time of year, fall, and the time of day, 10am, we are here and the crowds are minimal. All the shops are opening up but the walk down the side walk is casual. No ducking and weaving.

We stop occasionally to window shop and see what is up. There is a real estate office with pics of some super nice properties and they are not that expensive. A 2100 sq ft house is about $600,000Aus. A house of that type would cost the same in Edmonton and we don’t have a world class beach in the area. 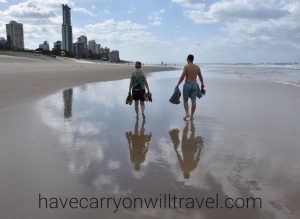 M and Debbie walking the beach earlier in the week.

My guess is there would be close to 365 bike rideable days here. Maybe a few of the torrential downpours would be a deterrent, and I am sure it would not be great on a +35C day but other than that bike riding would, in my opinion, be preferable to car transport. Very few folks ride here. I find that odd. There are bike lanes on every major street and plenty of side streets to stay safe but hardly any bikes. The other weird thing, and of interest to me because Edmonton just spent copious amounts of money on bike lanes, is the lanes here are not used. The only people I have seen in the bike lanes are the ones that know how to ride a bike and would most likely would be on the road anyway. Everyone else, including the riders of electric bikes and electric scooters, ride on the sidewalks. That being the case, I think the bike lanes are useless and a great waste of money.

Of the people I have seen on bikes a good percentage of the the bikes are electric. Not quite half but close. Good transport but not much on the fitness part. But as I mentioned they ride these things on the sidewalks and at speed. I find it rather dangerous, maybe there have not been enough collisions to make it much of a big deal??? 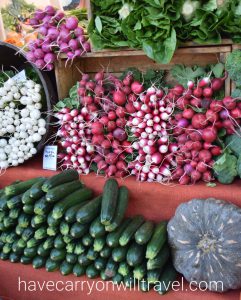 Other than a short walk on the beach the other day, today was our first “beach day” since we got here. Weather has been rather crappy for that so we have found other entertainment. Today the sun was out and even though the wind on the beach was a bit excessive, when we laid down we had the beginnings of a dune build up on our windward side, it was a good day to do it. The waves were big and the rip was quite strong, but the water was really warm and amazingly clear. Debbie and I have been swimming the estuary and the water is cold and murky, the ocean side is totally different and if not for the huge waves it would be good to swim in the ocean. I did swim a few strokes into the rip, which was running parallel to the beach, and made zero progress.

One of the tourist businesses that is running strong and by our calculations making a pit full of money is the helicopter ride along the beach. There is a non stop stream of heli’s plying the air from the harbour south along the beach and a constant line of Asian tourists lined up for the next ride. Every heli has a full load, the round trip takes about 20 mins. (our estimate), there are 5 or 6 heli’s flying in rotation, as one takes off another lands, and they do this 10 hours a day, 7 days a week. At $200 per rider they are making a killing.

The last odd ball piece of info has nothing at all to do with the tourist industry but is another observation of Aussie oddness. I go into a store and see something, today it was a specifically sized package of rosemary, I pick it up wanting to know the price. Nada, no price is on the tag or on the bin it came from. Nor are there prices on any of the other adjacent items. This is not always the case, it is just that it is not unusual. I’m guessing the idea is that it is either so expensive the prices is not justifiable or that anyone wanting rosemary is going to buy it anyway. Can’t say really, but I ask M and he says it is just one of the things about Aus that is a bit strange.

One of the hardest things to get used to is to look right first before crossing the road. Debbie and I have been taking care of each other and have called out more than once when the head of the other is looking left and a car or bike or bus or tram is approaching on the right. I have taken to looking both ways and still mess up. 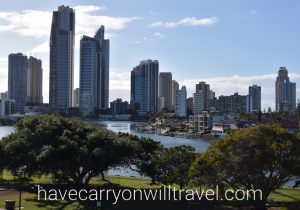 Australia is an extremely easy place to travel in, but there are still things that shake up ones complacency. One of the reasons for travel is to make sure you realize the systems within which you live are not the only ones and not necessarily the correct ones. Every time you experience a different way of doing something, you should reflect on the way you have learned it and try to adjust your thoughts and actions to suit the best aspect of all the ways you have experienced. This is what travel is all about.

This entry was posted in Australia and tagged Australia, Southport. Bookmark the permalink.