It is a day about town. Gold Coast has grown since I was here last in 1986. It has turned into a real city with big malls, urban sprawl and traffic to rival any western world city.

Pacific Fair,  the ubiquitous mall, you would think you were in Edmonton. Not much different except the names on the storefronts. There are sections of the mall exposed to the elements but 99% is covered and air conditioned. 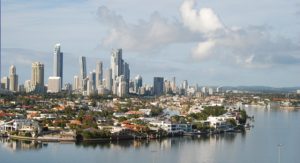 Another walk along the beach, the water is omnipresent here and a big part of life. It is “winter” so the beach is not too crowded. There are a few folks out, mostly surfers in wet suit and a few swimmers. There are walkers, runners and cyclists plying the path that we walk. To us flatlanders the sound of the water is ear candy and the vision of the waves rolling up onto the beach is mesmerizing. 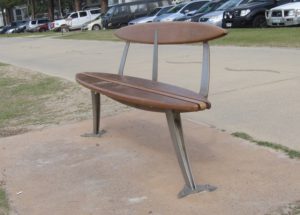 It is almost afternoon on Saturday and like any place people are starting to emerge from their hovels and everything is becoming crowded so we head back to M & D’s for lunch. No use slogging about in traffic.

Weather tomorrow looks a little sketchy for tomorrow in Brisbane. Whilst traveling along the road M’s phone rings and Virgin Australia is informing Debbie and me  we may experience some delays in our flight to Cairns. We HAVE to be in Cairns by 11am Monday. No ifs, ands, buts or maybes. They suggest we look at taking an earlier flight, but their phone system is broken and there is a fat chance of getting our times change. Yet after our next adventure we are able to connect and we are now to leave early afternoon which will give us enough time to get to our destination. 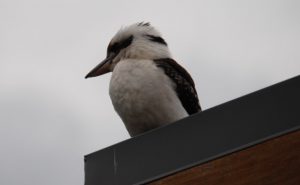 Shortly after lunch we head off to our first ‘tourist destination’, the dam. I think it is called Hinze Dam. Behind the dam is the water destined for the taps of Gold Coast. Not much ground water in this end of the world, but there is lots of rain so they have built a dam to store the rain water and the population centers have a supply of water year round. 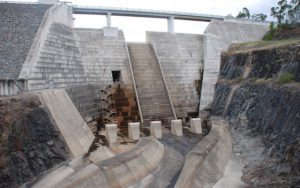 Impressive structure as is any dam. What I noticed is the downstream side of the dam very closely resembles a Mayan pyramid. More the slope then the texture but that image is what came to my mind.

On tap for this evening’s dinner is M & D’s favorite Australian pizza. As with most foods, pizza has become universal and even though we should be eating kangaroo or koala it is pizza we will eat.

I do like the size of this city as it is quite walkable. You can’t travel on foot everywhere, the city has grown in an organic fashion and has no real centre so the distance could be a factor but the tram or bus are reasonabley reliable. The temperature, the winter temperature, is very pleasant and walking about is very enjoyable. People here don’t seem to realize what they don’t have to drive everywhere thus the traffic congestion. It is not only North America that has a human reprogamming problem.

I think M & D chose a good place to live. The urban environment provides for a comf0rtable living situation yet the stress of a very large city is not there. It is also easy to escape, the hinterland is close so a day in the forest is mind soothing or a morning on the beach body surfing is a short walk away.

This entry was posted in Australia and tagged Australia, Gold Coast. Bookmark the permalink.