To Hell in a Turbo Prop

As we left Bhutan on the airplane this morning we popped through the clouds and Kanchenjunga was sunlit and majestic to the north of our flight pattern.

Landed at the dreary Dum Dum airport. First thing I notice is that the Kolkata folk do not speak English as good as the people in the hills. Our taxi driver had only a general idea of the area that we wanted to end up in. We made it. Right to the front door??????

We had got up at 4:30, missed breakfast, Kolkata was 30+C and so when we got here we were tired, hungry and way hotter than we have been in 2 weeks. We are in a new place without any knowledge of where to go or how to get around. We set out on foot and walk the 5km downtown. Quite an interesting tour. We crossed streets, a big accomplishment here. Debbie used the old trick of latching on to a local that was crossing the same street and following their path and cadence. Works like a hot damn. We walked by butchers and fishmongers whose stalls are a small tarp on the sidewalk. At least they had a tarp. And we passed several families living on the sidewalk with a tarp as a lean-to against a stone fence as their shelter. 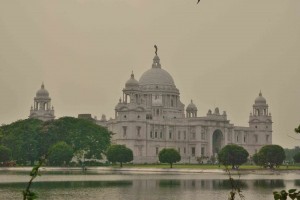 We did end up going to the Victoria Museum and walking across the Maiden, a huge park and I mean huge. It took Debbie and me about 30 mins just to cross a corner of the park, which was maybe about 25% of the total area. No matter how daunting the first day has been I think we will soon get into what Kolkata has to offer and will begin to enjoy the city for what it is.

Noise, crowds, odor, heat, garbage and exhaust were the things that caused a major assault on the senses after leaving the quiet, sparsely populated, odorless, cool, and relatively clean mountain air environment of Bhutan. What a wake up call.

This entry was posted in Bhutan and India and tagged India, Kolkata. Bookmark the permalink.