We are going to Africa, soon.

Today I get up late (7am). I head straight to the front door to get the newspaper. On the lawn is a elephant. Not large, but none the less an elephant. It is dark so in fact I only perceive the silhouette of an elephant. It is standing amongst the junipers with its trunk in the air trumpeting ‘good morning.’

So now I’m calling to Debbie, ‘There is an elephant in our front yard.’ She is lying in bed, lounging as retired folks do, thinking that I am having another one of my ‘moments.’ Oh that’s nice, she retorts, not taking me seriously. I hear the sheets shuffle as she rolls over for another moment or two of repose. I persist and eventually get her out of the sack to look out the front door to have a look at the elephant. She stands there shocked that there is in fact and animal on the lawn. It is still dark and Debbie comments that whatever it is it also resembles an ostrich.

We were trimming the trees in the yard a couple of days ago and what I thought had happened is one of the branches from the tree had got caught up and had blown down over night. I guessed that it had landed on the ground in such a way that the silhouette resembled an elephant or ostrich or whatever our imaginations would conger up.

An hour later I was opening up the drapes. The morning light was upon Edmonton and lo and behold there is an elephant at the end of our yard, standing there with its trunk in the air just as I had imagined. 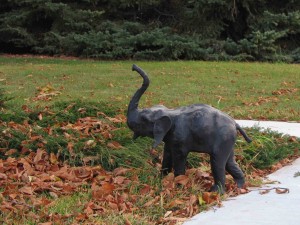 “Debbie, we have an elephant!”

My immediate thoughts are of the house down the street that has a few elephants in the yard and some promiscuous kid who relocated our visitor in the middle of the night. So, I head down the block to return the lost soul to its rightful place. I must look a little strange, a 59 year old guy in sweats walking down the street with an elephant tucked under my arm. I ring the door bell and the lady on the other side of the threshold tells me she did in fact love elephants and is jealous of our upcoming trip but that particular pachyderm was not hers. Since we have not much use for a pet I offer her my burden. She accepts and it is now sitting on her step protecting the entrance to her house .

We are headed to a land where omens are very much a part of life and could not help but notice that it was strange that a symbol of the land we are about to visit appears in our front yard. It could have been anything placed on any one of the 50 or 60 yards down the street but it is an ELEPHANT on OUR lawn. Neither one of us are believers in such mystic stuff but it is hard to ignore this omen. Here’s hoping we experience an intimate moment of bonding with one of these great beasts in the weeks to come.

This entry was posted in Planning and Packing, Tanzania and Botswana and tagged africa. Bookmark the permalink.

1 Response to An Omen