Two Nights in the Same Place?

Today’s a day in Taos. Why Taos? Well, it’s a ski town. Always been on a list for that, but to make it worth while for skiing we should visit in the winter. And. It’s a place used frequently on crossword puzzles, which promoted curiosity from which we discovered it is a place that many artists live and work. And. We are in the area, sort of, so why not stop by.

Forty or so years ago Taos was a backwater little town that for the most part only skiers knew about. Oh, it had its famous inhabitants, like D.H. Lawrence and even further back Kit Carson and there were a few artists that had “discovered” the place but in the seventies the word got out among the North American nomads, the hippies. They moved here in droves and Taos soon became a trendy place to live. That trendiness still holds true and there are many immigrant residents that have found a very easy going place to settle. I think maybe the biggest barrier to a perfect place is the influx of us damn tourists. Fortunately we also provide a source of income that allows those residents to make a decent living. 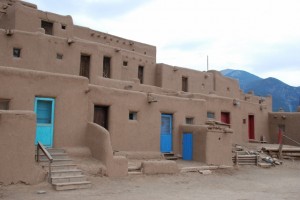 Long before even Kit Carson, maybe 800 years before, the Taos Indians established residency here with the construction of an adobe city, the Taos Pueblo. The structures are still inhabited and have been consistently for the past about 1000 years. The designers of the modern day condos being built everywhere along the west coast of North America (I am quite sure) took their inspiration from these native buildings. These dwellings are constructed of adobe and require constant maintenance. I cannot begin to imagine the number of man hours that have been put into additions and repairs over the last 10 centuries. A couple of the lower buildings are shops and accessible to the visiting public. We stop in at an art/craft shop to have a look see. The interior, although small, looks quite liveable. The dirt floors have been covered with wood flooring, there is a small fireplace in the corner providing heat on a cool morning and two or three tiny rooms to call home. I think the most impressive part is to see how much of the building type and methods have been only slightly modified and still used in the area today. There must be something to be said for the use of indigenous construction methods and materials. 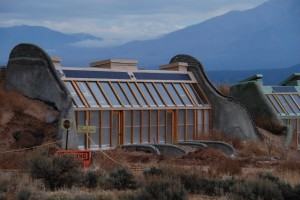 Farther down the road from whence we came yesterday a very different type of construction is taking place. There are several unique buildings being built that are referred to as Earthships. They too are buildings to live in but are built of more 20th century materials and 21st century construction methods. The premise is to build houses with net zero energy consumption using materials that have been discarded. The main structure is comprised of used car tires. They are stacked at least 2 rows deep on the north side of the building. Then earth is backfilled to fill the voids and sloping to the ground so that from the back the house looks like a small hill, just a natural topographical feature. The front side is exposed to the sun and is for the most part glass. This uses the solar gain to heat up the masonry surfaces on the living side of the glass and provides heating for the occupants all winter long. In the summer these windows are shaded and the solar effect on the masonry is minimal. Some of the more recent house have utilized pop and beer cans mortared together, used for both decorating and trying to take advantage of the insulating qualities of the dead air in the cans. I don’t know for a fact but I have to presume the ecological aspects of this experiment works. There are more than a few of the houses scattered across the landscape. They are truly strange looking and are outerspaceish. Thus the name I guess.

They have obviously proven popular with a certain facet of the population. I do question the commitment to the whole philosophy. The owners and workers are supposedly concerned about their impact on the environment but because of the size and number of vehicles parked around the construction sites and the now owned houses I wonder how much are they committed to saving the planet and how much it is the status, and bragging rights, of owning one of these places that prompts the purchase. 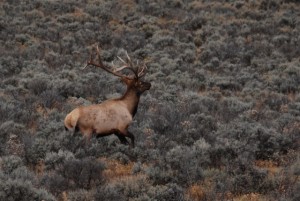 On the way back into town, the fauna of the area introduces itself to use. I noticed a couple of cars parked on the side of the highway ahead. I scanned the area to see if I could see anything and running a fence line parallel to the highway is an elk with a very large rack. Debbie pulls over and I reach for my camera, the elk jumps the fence runs across the road, over the fence on our side of the road and into the sage brush. He is quite a majestic animal and quite agile as well. He leaped a 4 foot fence without hesitation and was on his way and out of sight quickly. 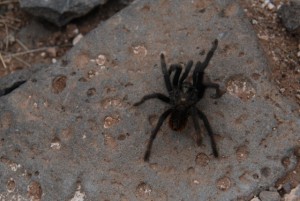 Next on the list of critters is a little more disconcerting. A black widow spider. Or at least I am reasonably sure it was a black widow. I have never really seen one and I can only remember transferring decals of them onto the model cars I built a mere 50 years ago. We stop at the Rio Grande to see the main geological feature of so many C & W films of the 50’s and 60’s and while walking toward the bridge to get a better look of the gorge, head down of course looking for rattlesnakes, I see movement. There waddling along on a path just ahead of me is a spider, very large and hairy. Debbie isn’t too excited about it but all I could think of was to snap a few pictures. It is far enough away so I am not worried about it leaping upon me and inflicting great pain, I just want to see if I can get a good photo.

The canyon by the way is awesome. Very deep and sharp, steep sides. The soil must not be very resistant to erosion and the water has a devastating effect on the landscape. 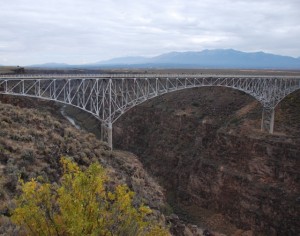 The central part of the town of Taos is small and easily traversed on foot. There are many shops and galleries that can occupy a curious tourist for half a day. Plying the streets and visiting the galleries is how we decide to wile away the afternoon. I mentioned Taos is a magnet for artists. The quality of the art produced here is very high and the market for a lot of the local artists extends well beyond the edge of this fine town. Many of these folks sell their works nationally and some internationally. Most of the galleries we visit have at least one piece we like but a couple of galleries display a good number of things Debbie and/or I like. As with all art there are few I would want in my house and frankly most of the art is far too expensive to be considered for purchase but one can still like art and enjoy the vision and not have to buy it.

A couple of really good meals later and we are back at the hotel relaxing for the first time in over a week.

I like Taos, the place, the setting, the food and the people. All that could lead to a ski trip here in the near future, but as we have mentioned before there are a lot of places to see in this world and every year that goes by is one less year we have to visit places yet unseen.

This entry was posted in Western United States and tagged New Mexico, Taos. Bookmark the permalink.